Böhmische Dörfer / Česká vesnice / Bohemien is all Greek to me

Bohemian is all Greek to me

This documentary clarifys the Czech-German relationship and dispels disillusions and
misunderstanding. A collection of interviews with contemporary witnesses, taking place in different locations, including the borderlands where German inhabitants used to be a majority. One of the key sequences presents director Samuel Fuller who, as a private in the US army, liberated the town of Sokolov and documented the atrocities at a concentration camp. Another scene describes the town of Hranice in the “As bulge”, where the “Iron Curtain” was closely watched during Communist rule. This mosaic, embellished with picturesque landscape panoramas, also contains the interesting memories of writer Lenka Reinerová. 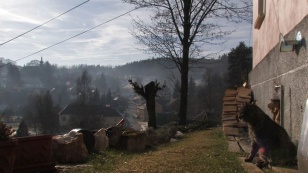