Retired American helicopter pilot Mark Buller has after his military service in Frankfurt moved to Poland to find a new home for his growing collection of army vehicles and his final missing piece - a wife. He finds a helper and admirer in the young, local Michał Niewczas - or 'Mike', as he prefers to be called. Mike engages in helping Mark realize his dream retirement. At the other end of town, Jan Konstantynow - the community's 82-year-old magician - does not plan retirement at all. But when the local cultural centre appoints a new director, Jan is forced to fight for his place in the spotlight. It seems that everyone here has shaped the world in their own heads, but can a comfortable illusion make you a happier person? 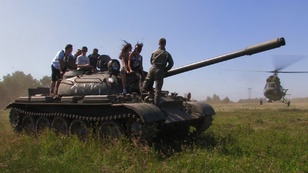