Goltzius and the Pelican Company

Goltzius and the Pelican Company

In 1600, the Dutch engraver and printer Goltzius tells of his adventures to find finance to afford a new printing press to print illustrated books, when he travelled to Colmar in Alsace on his way to Italy in the winter of 1590. He proposed to the liberal-minded Margrave of Alsace to make two grand illustrated books, a version of the Old Testament and a version of Ovid’s Metamorphosis. To sweeten the possibility of a deal, Goltzius, with the male and female members of his printing and theatrical company, stage six dramatisations of Old Testament erotic stories, symbolising the six sexual taboos of fornication, incest, adultery, paedophilia, prostitution and necrophilia - Adam & Eve, Lot & His Daughters, David & Bathsheba, Potiphar’s Wife, Samson & Delilah, and (from the New Testament) Salome & John the Baptist. 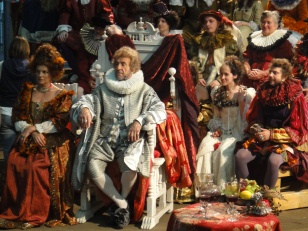