The film reconstructs a whale’s life for more than 200 years – as a calf, learning everything from his mother: his first mating; the constant struggle to avoid the whalers’ harpoons and sharp lances; the amazing song of the bowhead whale, the sounds of the sea, with sudden change brought by the invention of the steam ship, so nature’s own sounds are not the only sounds our whale hears; the depth charges of the First World War; being declared an endangered species in 1935, and the first animal in the world to receive such protection to the present day. 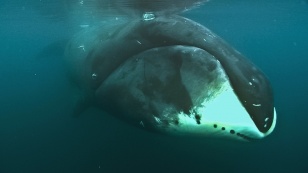