A unique place, a unique programme: “24h Jerusalem” tells a day in the life of a fascinating and contrasting city. A 24-hour television and Internet experience like no other.

Jerusalem, between Heaven and Earth - the eyes of Christians, Jews and Muslims all over the world turn to the city. The destinies of Israel, Palestine, the Middle East and indeed the whole world are inextricably linked to Jerusalem's. For an uninterrupted 24-hour period, watch the full array of the city's inhabitants living out their daily lives.

From 6am till 6 o'clock the following morning, from daybreak till night's end, a unique opportunity to glimpse the everyday life of the people of Jerusalem - that's the amazing experience offered by “24h Jerusalem”. Footage of the city's Palestinian, Israeli and other inhabitants, captured in April 2013 by about 70 film crews, reveals lives as they are lived, from one hour to the next. A programme in which people from all backgrounds, all persuasions, and all classes find their own ways and reasons to live in a city where everything seems to clash: prayer and religion, the heritage of a several thousand year old history, the geopolitical conflict, the daily struggle to earn a living, to find love, and to fight for one's rights while respecting everyone else's. 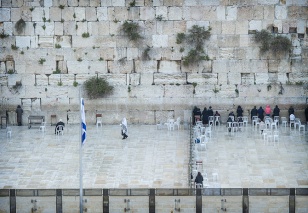