Dutch filmmaker Sander Francken directed the musical feature film BARDSONGS in India and Mali. At the basis of this film are three folk tales from respectively Rajasthan, Western Africa and Ladakh, put to music by musical celebrities from those regions and interpreted by local actors who knew these tales from their youth. The film focuses on the similarities between three totally different worlds.

The world of Sahir, whose father refuses to pass judgement on his fate… the world of Bouba, a pupil at a Koran school who has to find the largest part of all knowledge… and the world of Sonam, who has to sell his dzo (a crossbreed between a yak and a cow) and therefore journeys to town through the Himalayas with his daughter. The filmed tales provide the viewer with a glance at universal wisdom and music.

Part one of BARDSONGS tells the story of a father and his son. On a daily basis they collect waste plastic in the streets of an old Indian city. The father distinguishes himself from other people by never judging occurrences around him – however much fate temps him to. His posture meets with a lot of incomprehension and annoyance by people around him. When a dramatic occurrence reveals its true significance after some time, the wisdom of the plastic collector is unveiled for everyone.

Part two is set against the magnificent backdrop of Djenné, a city in Mali, considered to be the center of Islam in Western Africa. The story is about Bouba, a scholar at a coranic school, who must the answer to the question: ‘What is the greatest part of all knowledge?..’ When, after a six day journey of discovery in and around Djenné, he still does not come up with the right answer, it appears to be quite simple and overwhelming at the same time.

The last part of this triptych of folk tales is about a father who travels through the Himalayas together with his daughter in order to sell their dzo. Everyone they meet on their journey has some sort of criticism or advice, about how they should treat their dzo, how they should treat each other, how to get a place to sleep in a monastery, which route to take, etc. The father is by nature inclined to lend an ear to one and all, this to the mounting indignation of his daughter. When the daughter, the end of their journey being in sight, confronts him he finally changes course… 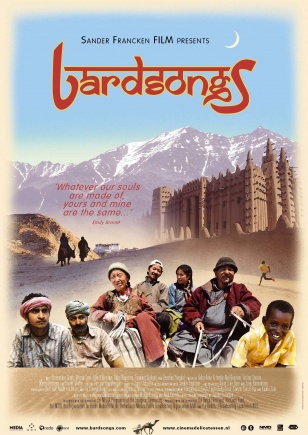