Boj is a free-spirited boy – full of creativity and messy fun!

Since popping up as the new kid in Giggly Park, Boj has made a load of new buddies. Everyone loves his zest for life and adventurous spirit.

And Boj loves his new neighbourhood too. There’s always something to discover and a problem to solve using his upside-downy, inside-outy, topsy-turvy way of seeing the world!

Boj is a Bilby – a rare bandicoot from the Australian Outback. He’s burrowed to Giggly Park with his parents Mimi and Pops and they now live in a simple, quirky underground burrow at the centre of this cosmopolitan community.

Life in Giggly Park is way more sophisticated than in the Outback. And life above ground is very different to below ground, so Boj has a unique perspective.

His ‘out of the box’ creative thinking provides solutions to even the messiest of problems!

Boj shows his buddies how to play the Boj way with his ‘Boj-a-boom’ ideas! 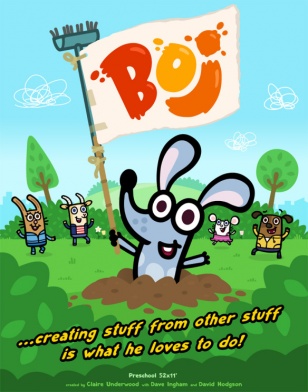