It's all so quiet

Helmer is 55 and a bachelor. He tends a remote farm and looks after his ailing father. Theirs is a brittle, tight-lipped relationship. When his father moves ever closer towards the grave, Helmer shifts him upstairs. He then clears out all the junk from the ground floor, throws the house plants on the dung heap, orders a new bed, and begins to live a life of his own. From time to time, Ada from the neighbouring farm drops in with her sons, and the milk truck driver regularly seeks Helmer’s company – but Helmer withdraws into his own world. He paints his late brother’s room and moves in Henk, an eighteen-year-old farmhand. These steps are all undertaken to make a stand against his father. But his father’s unfulfilled expectations continue to hinder Helmer’s emotional well-being. Henk, however, responds to Helmer’s clouded feelingswith fond openness. And the milk truck driver can’t seem to forget Helmer either.
In her latest film, Nanouk Leopold weaves soberly observational but impressive images into a persistently quiet atmosphere that illuminates her protagonist’s emotional world and his breakthrough into a new self-confidence. 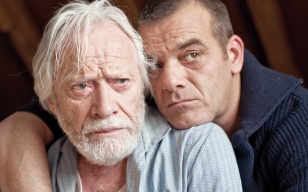