Burning in the wind

“It’s the same idiotic rat race every single day. I get up at five in the morning, wash, shave,make myself a cup of coffee, run out of the house, just manage to catch the bus where I close my eyes and allow the daily horror that is my life to slowly paralyse me.” Tobias Horvath lives in Switzerland where he has been working at a watch factory for the past ten years. It’s the same old routine day in, day out; every day the same old monotonous round of meaninglessness.Tobias was born somewhere in eastern Europe: “in a village that has no name; the country isn’t important either”. He grew up in poverty, under the aegis of his mother who was a beggar and a thief – in short, the village whore.One day,when Tobias finds out which of the many men coming and going at their house happens to be his father, he sticks a knife in his back. Believing him to be dead, Tobias beats a hasty retreat – to the West. But even in the West he finds it impossible to escape the past and is tormented by nightmares and visions. He doesn’t even take any notice of the attention being paid to him by an acquaintance, Yolande. Tobias seeks refuge in writing; he waits... and waits for his fantasy woman – Line – to appear. In the meantime, he searches for her in the face of every single woman he encounters. One day she actually appears before him in the flesh; her name is Caroline, she is a former classmate of his – and one of his father’s daughters. She is now married to a scientist and has a little girl of her own. Caroline also works at the watch factory and so Tobias sees her on the bus every morning. He begins to follow her wherever she goes, spying on her; before long, he falls madly in love with her. Even though his love for her is quite hopeless,Tobias refuses to leave her alone... 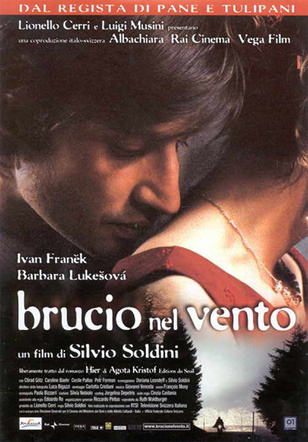