This is British social melodrama made uniquely personal through the prism of Hopkins’ ravishing photographic eye (here collaborating with DoP David Proctor) – its fractured, poetic narrative the perfect form for the story it delivers. Told simply, Bypass documents the breaking point in the life of Tim, a young man too physically weedy and soft-hearted to cope with the extreme demands of his life on a council estate, with a terminally ill single mother, an absent father and brother, and a wayward younger sister to care for. As Tim’s health declines and a net of troubles close around him, Hopkins’ film becomes peopled with phantoms and shadows. George MacKay is exceptional as the haunted, hunted Tim (almost unrecognisable from his muscular role in Paul Wright’s For Those in Peril).

Bypass is the story of Tim, a young man of the English economic underclass. Tim is a good kid. Tim cares for those close to him and is aware of his responsibilities. Tim needs to earn money. Tim is a small-time fence, passing on stolen items. Tim cannot read nor write very well. Tim is grieving the recent loss of his mother. Tim is a grandson. Tim is a brother. Tim is a boyfriend. Tim will soon be a dad. Tim is ill. Tim does not understand how ill.
His older brother Greg is recently released from prison. His sister and dependent Helen is lying about attending school. His girlfriend Lilly loves him, and Tim loves Lilly but is uncomfortable with the news that he’ll soon be responsible for a new life; a life he knows will be born into the same circumstances as his own.
When, for reasons unknown, his supplier is brutally beaten, Tim’s world takes on a new menace and physical threat. As this threat deepens and the pressure increases, so too does his illness: he escapes to Lilly but collapses. He awakes in a hospital bed, in a maze of wires and machines.
We jump forward to the birth of Tim’s son. A moment of profound uncertainty, a new focus of potential and hope, or the continuation of a repeating process? 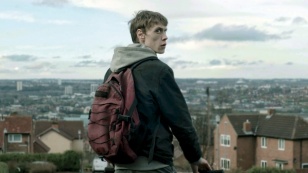