The happiest girl in the world

Eighteen-year-old Delia Fratila comes from a poor family in a small Romanian town. She has won an expensive car in a promotional competition by mailing in three labels from juice bottles. To prove that the beverage company really is handing over the prize, a video is to be shot showing Delia and the car. Delia and her parents make the long trip to Bucharest for the video shoot, which takes place on a large square in the middle of the city. The shoot takes the whole day. What Delia has to do seems quite easy: she has to sit behind the wheel of the car, drink juice and thank the company. But the shooting is plagued with the usual problems: Delia keeps forgetting her lines, the drink doesn’t look good enough for the client, they have to keep refreshing her makeup, the shooting angle needs to be changed, some spotlights break, etc. During breaks in shooting, Delia has long talks with her parents that eventually turn into ugly arguments. They discuss what they should do with the car: Delia wants to keep it for herself, while her parents would like to sell it. The more absurd the shooting becomes, the more heated the argument. What seemed at first to be a lucky event becomes for Delia an extreme and emotionally painful situation, in which she has to rethink and question her relationships with her family. 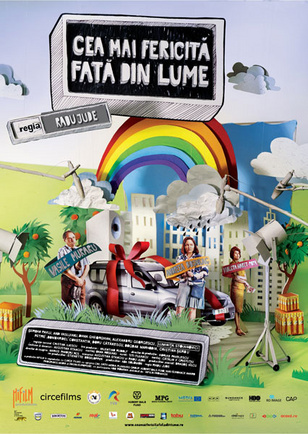