Inspired by the famous La Fontaine fable, «The Cricket and Antoinette» is a humorous story dealing with genuine qualities: tolerance, love and overcoming obstacles. Two main characters, Django and Antoinette, represent two separate worlds, the world of noise, chaos and creativity on the one side, and the world of work, order and discipline on the other. As they fall in love, in spite of obvious differences, they manage to create harmony.

A well-known story told in a new and original way, bound to the world of music and songs and based on atmospheric and rich aesthetics, presents a good foundation for an animated feature film.

Django, a guitar playing cricket falls in love with Antoinette, a female ant whose wedding plan is allready underway. Failing to elope together, they get separated. Her wedding follows, and Django hides himself in the human house.There, a Parrot iterpreteur, and her Caretaker, capture him after hearing him play the music. They force him to attend a TV talent show and he becomes an instant success. But without love there is no happyness... 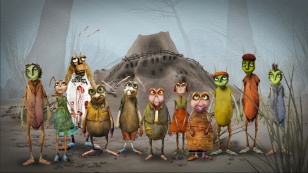