Dark Touch opens one evening, in the middle of the countryside in an isolated house that comes to life, as if gripped by madness: objects and furniture fly into a rage against the inhabitants. Eleven-year-old Niamh is the only survivor of the bloody carnage caused by the furniture: her parents and her little brother are dead.

The police suspect a gang of killers and vandals and they ignore the account given by Niamh who reveals the murderous rage of the place and objects. She is temporarily taken in by Nat and Lucas, friends of her parents, who try hard to calm her trauma by surrounding her with love and organising a normal life and education for her with the help of the local social worker.

But Niamh doesn’t calm down, quite the contrary… Around her, the signs of danger continue to appear, and the place remains invested with a hidden violence, which will soon break out again and create fresh carnage, and more victims… 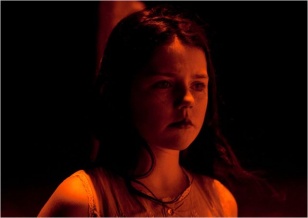