Landmark documentary exploring what happened over 13 days in October 1962 when the fate of the world lay ultimately in the hands of just three men.

HERE WAS CUBA tells the inside story of the Cuban Missile Crisis and how in October 1962 the earth teetered on the very brink of nuclear holocaust. In the first major feature documentary on the subject, the film brings to life the three central characters Kennedy, Castro & Khrushchev and reveals how the world’s most powerful men fell into an abyss of their own making and what courage and luck it took to climb out again. With nuclear brinkmanship high on the international agenda today, the events of October 1962 hold invaluable lessons for a generation too young to remember just how close we came to the end. 'Nuclear catastrophe was hanging by a thread... and we weren't counting days or hours, but minutes.'

Soviet Army Chief of Operations, Anatoly Gribkov On October 22nd 1962, President John F Kennedy informed the world that the Soviet Union was building secret missile bases on the Island of Cuba, 90 miles off the shores of Florida. The events of the next 13 days, known as the Cuban Missile Crisis, brought the world closer to nuclear disaster than it had ever been before or since. The fate of the planet ultimately lay in the hands of three iconic characters – Nikita Khrushchev, Fidel Castro and John F Kennedy. A complete picture of the events of those 13 days has only emerged in very recent years after countless declassified documents were released from Soviet, American and Cuban archives. Extraordinary revelations have come to light about Castro’s role and how at the height of the crisis, he encouraged the Soviets to strike, fearing that Cuba was doomed no matter what unfolded. Also emerging are remarkable details on a series of rogue incidents outside of Kennedy or Khrushchev’s control, each of which came within a hair’s breadth of triggering all out conflict.

The film also fully explores, cinematically and poetically, the impact a Nuclear War would wreak on this fragile planet, and considers the threat still posed by this spectre. The story has huge resonance today with the recent nuclear developments in India, Pakistan, North Korea and Iran. With space to linger on the horror and madness of October 1962, the film evokes the visceral fear and uncertainty that was widespread and hopefully sounds a warning bell as to the fallible nature of humankind and highlights the very real threat we still face today.

Featuring revealing interviews with key witnesses and experts including Sergei Khrushchev, son of the former Soviet premier and, in one of his last ever interviews, Kennedy's trusted advisor Ted Sorensen – Here Was Cuba is an edge-of-your seat tale of espionage and intrigue at the highest level offering a fascinating perspective on one of the most harrowing times in modern history. 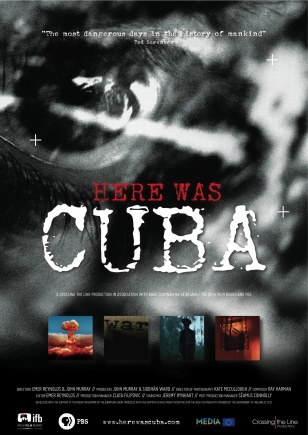