This film is about IVO (60), a farm labourer who works for an agri-business conglomerate in rural Croatia. Many years ago, he was convicted of rape and although he served his sentence, the legacy of his crime still lingers. Three loosely interlinked stories, taking place over a single night and dealing with Ivo in different ways, gradually give us a stark but compassionate picture of Ivo's life, and of a rural community which is overshadowed by the aftermath of the 1991-1995 war, just as Ivo is still haunted by the crime he committed so long ago.
Distracted with problems, Mirjana (55) remains without gas on a deserted road at night. Ivo (60) drives her to the gas station, where she finds out that he served time in prison – he raped a woman. Josip (30), the gas station worker, is surprised when Mirjana decides to drive back with Ivo. Touched by Mirjana's gesture and wishing to stay with her a bit longer, Ivo hides her car keys and takes her to his gloomy dwelling to wait for the towing service there. Instead, the police comes, making sure that Mirjana isn't in trouble. Ivo is convinced that Mirjana called the police – he roughly gives her the keys and tells her to leave.
Going home after his shift, Josip sees Mirjana's car by the road and calls the police to say she is somewhere with Ivo. Josip's younger brother has just found out he will become a father and is celebrating in the coffee bar on the ground floor of their family house with his friends and war veterans who are regular guests. Josip persuades his godfather Rodić to go with him to the police because he is worried about Mirjana. Policeman Krešo (40) tells them everything is fine and Josip returns to the celebration.
At home, Krešo finds his wife Ana unhappy with him because he has forgotten to buy medicine for their sick son. He goes to the pharmacy and sees police cars at the agri-corporation; Ivo has been found dead, he obviously killed himself. Krešo watches Ivo's carefully mown garden, sees his dog who is barking incessantly and takes it with him. At home, he takes the crying child into his arms, carries him to the garden and shows him the dog. The child calms down.
Next morning, the harvesters go out into the fields to harvest. 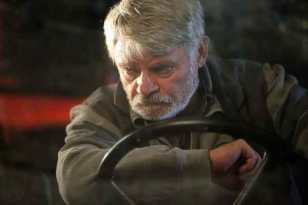