France, in the 1760s. Born to a bourgeois family, Suzanne (Pauline Etienne) is a beautiful young girl with a natural talent for music who longs to live in society. She is at a loss when her parents send her off to a convent, expecting her to become a nun. Suzanne first resists the rules of the convent, but soon finds out that she is an illegitimate child leaving her no other option than to pronounce her vows, thus paying for the consequences of her mother’s sin.

She quickly wants to escape the religious path by trying to revoke her vows when the Mother Superior who had brought her comfort and solace dies. Her substitute, Sister Christine (Louise Bourgoin), turns out to be a sadistic and cruel Mother Superior, inflicting the worst forms of humiliation upon Suzanne, such as depriving her of food and clothing. Suzanne is finally transferred to another convent, where she discovers another Mother Superior (Isabelle Huppert), who develops an embarrassingly affectionate bond with her…

Adapted from Diderot’s eponymous novel, The Nun tells the trajectory of a woman trying to resist imposed religious values, unveiling the dehumanization of cloistered life. 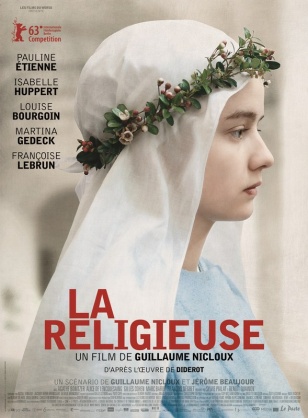