The Infamous and His Brother

A leader of the Turin “column” of the Red Brigades, Italy’s extreme left-wing terrorist organization, Patrizio Peci was arrested in 1980. After his arrest, he started collaborating with the magistrates. This was devastating for his former “comrades”, who kidnapped his brother Roberto in revenge. Roberto at that time had just married and had no connection to his brother nor to the Red Brigades. Roberto was put on trial by the terrorists and filmed with a camera (a forerunner of the Islamic terrorist videos of the XXI century) and eventually forced to confess being a traitor of the organization. Her sister Ida made desperate attempts to save his life. She even organized a press conference to declare Roberto’s innocence publicly. His brother Patrizio made a statement from prison, but nothing could stop the execution. After 26 year, Ida has now decided to tell her family story. She painfully recollects memories of their childhood, until the day Patrizio left his hometown to join the Red Brigates and stopped communicating with his family. Along her narrative, the exclusive and shocking video and audio material of the trial shot by the Red Brigades. 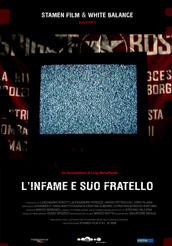