Krsko is a Slovenian industrial town on the border to Croatia; it’s three main sights are: the country’s only atomic power station, a paper factory and a speedway track. Krˇsko is home to Ludvik, a one-time speedway champion. Ludvik is a widower; a frustrated cynic who transports illegal immigrants from the Croatian to the Italian border night after night in a lorry.The immigrants come from the former Soviet Union, from Pakistan and Afghanistan; they include Kurds, Albanians and Macedonians. All of them are full of dreams of a bright future in the West. In these parts such refugees are known as “spare parts” – because many of them are prepared to sacrifice a kidney or other internal organ in return for freedom. One day, Ludvik’s boss assigns him an inexperienced young co-driver named Rudi. On their first trip out together Ludvik tests the new man’s reliability; among other things, they exploit a pretty young Macedonian woman’s desperation, demanding sexual favours of her. On the homeward journey, Rudi expresses his moral scruples about such behaviour. Ludvik decides to take the young man in hand. The two colleagues start to meet each other in their spare time; they go to motorbike races together – and continue to drive refugees through their country, night after night. Gradually, Rudi begins to lose his reservations. Before long, it is not the ostensibly hard-boiled Ludvik but his young partner who proves to be the more merciless of the two... 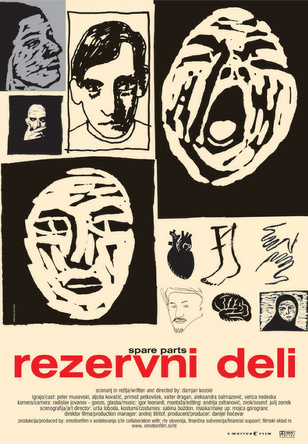