Spring 1943. The Germans have lost the battle for Stalingrad and, in Munich, members of the White Rose infiltrate the city with a wave upon wave of anti-Hitler activities and slogans. Sophie and Hans Scholl are busy distributing flyers in the main hall of Munich University when they are observed and arrested. From this point on, the film adopts Sophie’s perspective to tell the story of the interrogations that followed their arrest, as well as the brother and sister’s trial and pronouncement of their sentence. At first, Sophie feigns innocence, fighting tooth and nail to secure her and her brother’s release. However, sensing that the death penalty awaits them, she then does her best to protect her brother and the other resistance fighters. Gestapo man Mohr begins to admire Sophie and indicates that he will help her if she admits to being a fellow-traveller. But Sophie refuses to give up her conviction, instead confronting Mohr with his own unthinking perception of what is right and just. Roland Freisler, chief of the Nazis’ “People’s Court”, is sent from Berlin to Munich to conduct a show trial against the students – in spite of the fact that the death penalty has already been decided from the outset. At a hearing that makes a mockery of all the rules of jurisprudence, Sophie and her brother are sentenced to the death penalty. During the trial, Sophie battles so brilliantly against Freisler (who is positively snorting with rage) that her steadfast behaviour even wins her the approval of the male Nazi spectators at court. As soon as the trial is over, the brother and sister are taken away to Stadelheim to be executed. They are allowed to say goodbye to their parents before sharing their final cigarette. History has of course shown that Sophie Scholl was right in her last, defiant prediction to Freisler: “You’re hanging us today but, tomorrow, it’ll be your heads that will roll!” 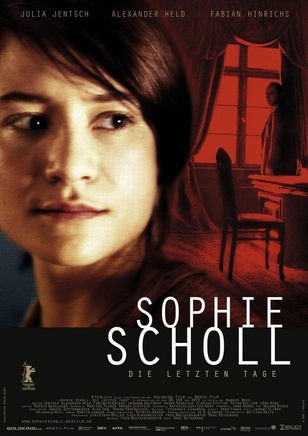