In Abkhazia, a country born in the pains of war from the big-bang of the communist utopia, researchers have been trying to reach some of humanity’s everlasting dreams: control nature, prolong life and conquer the universe…

Since 90 years, they are using monkeys to achieve all these.

In 1927, one orang-utan named Tarzan was brought to Sukhum. He was meant to serve for the creation of a hybrid between Man and Ape. This was the starting point of the monkey nursery. Since then, primate experiments have continued in the Caucasus, stretching the limits of Science towards Fiction. Monkeys were used in order to find the elixir of long life or a cure for cancer; they were sent on spaceships … And the story goes on today.

Tarzan’s Testicles is a fi lm on the only surviving utopia of our times: medicine. In the background, you will notice the ruins of every other possible utopia.

A film about utopias and a metaphoric drama that threads the similar destinies of monkeys and men. 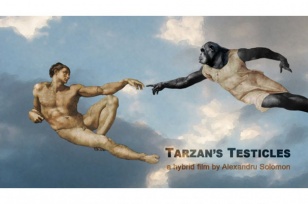