The British filmmaker Phil Grabsky got to know the young Afghan Mir while filming him for the documentary The Boy Who Plays on the Buddhas of Bamiyan, which screened at IDFA in 2003. Mir and his family had fled from the north of the country and were living in a cave next to where the Taliban had blown up the giant ancient statues of the Buddha. Grabsky then decided to continue to follow Mir's life for the following 10 years. In The Boy Mir, we see him growing up from a playful eight-year-old into a young man with an uncertain future. Grabsky shows the day-to-day life of a poor Afghan family and allows Mir, his father and caring brother-in-law to reveal their hopes and concerns. They are back in their village in the north of Afghanistan, where it is now more peaceful, although progress is painfully slow. As a child, Mir wanted to become a teacher or president, but now his thoughts are more concerned with survival. He has to till the fields, gather firewood and load coal in an extremely dangerous mine. Now and again, news reports inform us about the deteriorating political situation, but Mir's difficulties are more quotidian in nature. Despite everything, the film is full of humor and fun - and a testimony to the human spirit. It is also an extremely revealing look inside Afghanistan. 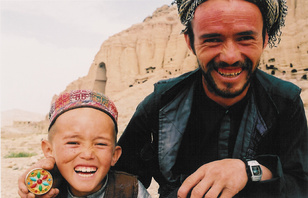