The beautiful fugitive, Grace (Nicole Kidman), arrives in the isolated township of Dogville on the run from a team of gangsters. With some encouragement from Tom (Paul Bettany), the self-appointed town spokesman, the little community agrees to hide her and in return, Grace agrees to work for them. However, when a search sets in, the people of Dogville demand a better deal in exchange for the risk of har-bouring poor Grace and she learns the hard way that in this town, goodness is relative. But Grace has a secret and it is a dangerous one. Dogville may regret it ever began to bare its teeth... 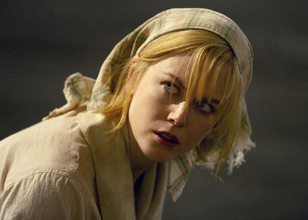