Mortimer Granville is a brilliant young doctor; he takes modern science as seriously as he does his solemn Hippocratic Oath. Unfortunately, his rigour goes unappreciated by most of his peers. They dismiss Dr. Granville’s enthusiasm for what they deem fadish new ideas — ideas such as his “germ theory.” Mortimer is nearly ready to give up on medicine altogether when he meets Dr. Robert Dalrymple, London’s “foremost specialist in women’s medicine.” That lofty title means that Dalrymple is an expert in “hysteria,” a mal­aise diagnosed so liberally that Dalrymple hypothesizes at least half the city’s women are sufferers. To ease these patients’ stress, he has developed a form of therapy that involves the careful manual stimula­tion of a certain female body part. In this period of sexual repression, it never occurs to Dalrymple that these housewives are experiencing something more basic and natural than a mysterious epidemic of insanity: horniness. 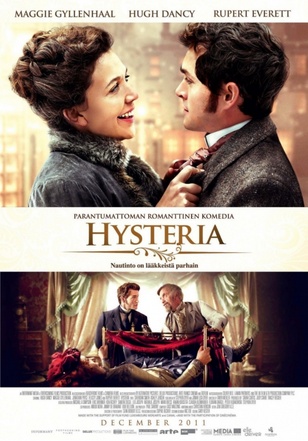