Mondays in the sun

The  story of the day to day trials and tribulations of a group of workers affected by industrial rationalisation in a coastal town.

A city on the northern coast which turned its back on the countryside long ago and surrounded itself with industries which forced it to grow disproportionately, pushing and shoving, fed it with immigration and workers, and painted a horizon of chimneys, of problems and hopes, of future uprooting. A group of men who walk its hilly streets every day, looking for life’s emergency exits. Long term fear, people who perform a balancing act at the end of the month and at the beginning too, performers without a net and without an audience, without applause at the end, who daily walk the tightrope of precarious employment, who prop up their existence with a scaffolding of hope, and convert their few happy moments into trenches, conversation, routine 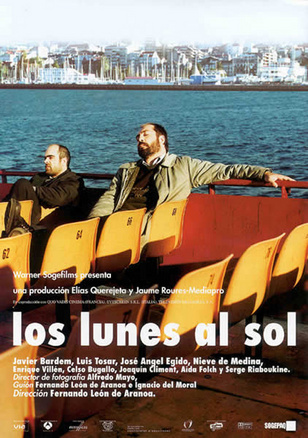