Her mother goes off to Kenya in search of beach boys willing to provide her with amorous services. Her staunchly Catholic aunt is absorbed in house-to-house evangelism. Thus, thirteen-year-old Melanie spends the holidays in a dietcamp in the Austrian mountains. In between physical training and nutritional counselling, nightly pillow fights and a secret bout of binge drinking at the local disco, she falls in love with the doctor and camp director, who is forty years her senior. Melanie uses all her seductive wiles to win him over …
In the third part of his 'paradise' trilogy - following Paradies: Liebe and Paradies: Glaube - Ulrich Seidl pits the deep-seated human desire for love and security against harsh reality. From the sterile surroundings of the diet camp, Seidl filters impeccably pristine, minimalist images in which any hint of sensuality, passion or anarchy would appear to be a complete anathema. And yet Paradies: Hoffnung is the most tender of the three ‘paradise’ films, for his young protagonists bear within them a spark of hope that love is not just an illusion, but can be an honest and powerful emotion. 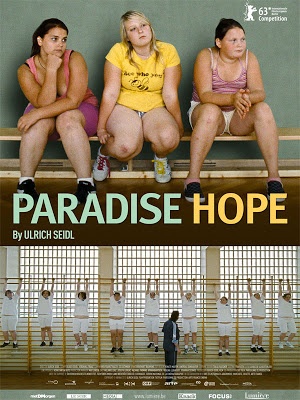