Green is the color of hope. Green is the color of Islam. And Green was the symbol of recognition among the supporters of presidential candidate Mir-Hossein Mousavi, who became the symbolic figure of the Green Revolution in Iran last year. The presidential elections on June 12th, 2009 were supposed to bring about a change, but contrary to all expectations the ultra-conservative populist Mahmoud Ahmadinejad was confirmed in office. As clear as was the result, as loud and justified were the accusations of vote-rigging. The on-going Where is my vote? protest demonstrations were again and again worn down and broken up with brutal attacks by government militia. Images taken from private persons with their cell phones or cameras bear witness to this excessive violence: people were beaten, stabbed, shot dead, arrested, kidnapped, some of them disappearing without trace. What remains is the countless number of dead or injured people and victims of torture, and another deep wound in the hearts of the Iranians.
THE GREEN WAVE is a touching documentary-collage illustrating the dramatic events and telling about the feelings of the people behind this revolution. Facebook reports, Twitter messages and videos posted in the internet were included in the film composition, and hundreds of real blog entries served as reference for the
experiences and thoughts of two young students, whose story is running through the film as the main thread. The film describes their initial hope and curiosity, their desperate fear, and the courage to yet continue to fight. These fictional 'storylines' have been animated as a motion comic – sort of a moving comic – framing the deeply affecting pictures of the revolution and the interviews with prominent human rights campaigners and exiled Iranians. Ali Samadi Ahadi's documentary is a highly contemporary chronicle of the Green Revolution and a memorial for all of those who believed in more freedom and lost their lives for it. 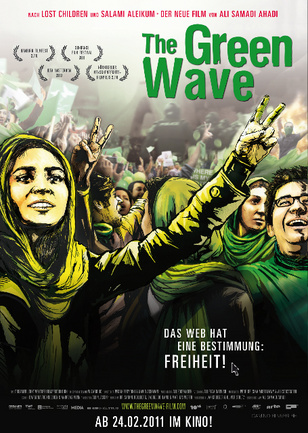