Elsa lives on casual jobs : at night, she cleans buses in a deserted depot. By day, despite being sleepy, Elsa watches over a young and wealthy couple’s child. In the hope of landing a real job, she goes to interviews which turn out badly. Mathieu, her next-door neighbour, keeps on failing interviews too. Someday, Elsa is expelled from her flat. Starts an uncertain life, with a potted plant as a fellow sufferer, and Mathieu who sometimes offers her some love she’s not ready to accept. The temptation of leaving everything leads her into the forest, where Mathieu has also found refuge and settled. For a while, they live here, far from everyone, even if both know they will have to get out someday to face the world or leave it forever. 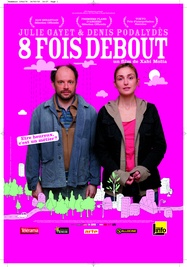