Maria is running away on the highway. She is alone in her roaring SUV. Behind her, fire and a case full of money. In front of her, the hopeless vastness of the motorway. Her crazy, accelerating course will stop at nothing. Only a day before she was a caring mother, a loving wife, a responsible daughter. Today she has gone rogue: she is determined to sweep away everything she has ever cared for. Maria’s tragic tale of ascent to redemption is narrated through bits of the present that become tangibly interwoven with fragments of the past, creating a dazzling and devastating mural of contemporary Greece. Behind the eternal reign of her average greek family, lie only wrongly asserted sexuality, lies and debts, which can only be exposed by a blast. Violent as much as honest, A Blast follows uncompromisingly its anti-heroine, as she desperately reclaims the life taken away from her by an envious mother, a mentally challenged but all demanding sister, an absent husband and a hostile country. The comic goes hand in hand with the tragic and a hidden tenderness constantly counterparts the atrocious reality in a greek tale that is more timely than ever. 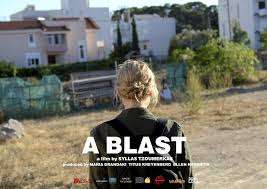