A Year of Hope

A Year of Hope

Is it possible to change the lives of abused street children and give them hope for the future? The Stairway programme makes an attempt in the Philippine capital, Manila, where they give twenty vulnerable street children one year away from the slum. One year in the name of hope – and one year with a bed to sleep in, proper food and a schooling process that aims to bring them back to life after the severe sexual assaults they have all endured and reacted to very differently. 13-year-old Justin's greatest wish is to become a true ladyboy, and 15-year-old Pablo has forgotten how to smile after witnessing his family being killed. Mikala Krogh is there during the whole year in her latest film, which gives images and voices to the most vulnerable youths in a society where every third child is sexually abused, and where thousands of children live alone on the streets. A both gripping, politically urgent and cinematically refined film about how you can actually make a difference for some of them. 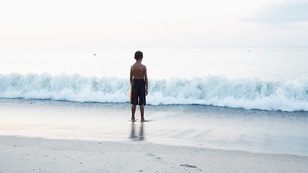