Two systems: the Nazi machine . . . the Vatican and Allied diplomacy. Two men struggling from the inside. On one side, Kurt Gerstein, a real-life chemist and SS officer, supplied the death camps with zyclon B while he tirelessly denounced the crimes and alerted the Allies, the Pope, the Germans and their churches at his family’s and his own risk. On the other, Ricardo, a young Jesuit, a fictitious character who represents all the priests who had the heart to struggle against savagery, often paying for their courage with their lives . . . Countless priests, some known, others anonymous, who simply were not content to live with the silence of their church’s hierarchy. At what moment in a man’s life must ethics come before self-preservation? Kurt Gerstein knew and wanted the world to know.The film puts on trial the silence of all those who knew and remained silent. 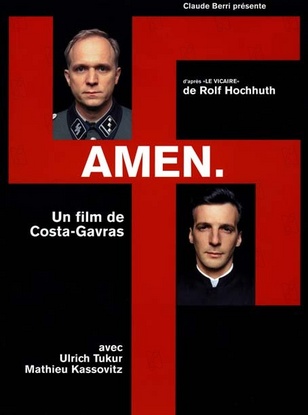