The comic story of the very unusual election of the President of the Republic...

In a small mountain village lives a man with the famous name of Giuseppe Garibaldi, known by everybody as Peppino. He is an optimist who loves fishing, hanging around with friends and his temporary job at the local library. One day, due to a political error, something amazing happens: Peppino is mistakenly elected President of the Italian Republic. Pulled out from his quiet life, he has to play a role for which he is obviously inappropriate, but his common sense and his instinctive gestures are incredibly effective, except for what concerns the protocol, for which he gets in trouble. The inflexible and fascinating Deputy Secretary General of the Presidency of the Republic, Janis Clementi, tries anxiously to prevent the unpredictable actions of the President. Peppino's joyful madness, his humanity and his disarming honesty hit the institutions by surprise - especially in this time of crisis - winning over the disheartened country. However, conspiracies, diplomatic incidents and seedy political machinations loom on the horizon. 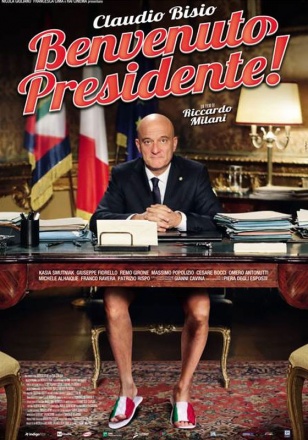