The misadventures of Mona Gajdó, a Romanian of Hungarian origin single-handedly raising her daughter, whose father is the strange Viorel. Persuaded by Armenian Vacariu of the necessity to go abroad to ensure her economic survival, Mona puts her child in the care of Rodica, a fortune-teller to whom she promises to send money every month. When she gets to London with forged papers, the young woman is led to one of the capital’s night clubs, the Bibliothèque Pascal, where she works for a time before getting arrested by the police for working illegally. After four months in prison, the night club owner manages to get her released, but her freedom has a price: prostitution in the secret bedrooms of the Bibliothèque Pascal – which offers its clients the possibility of sleeping with sexual slaves representing great figures of literature (Antigone, Katherina Minola (Shakespeare’s Taming of the Shrew), Mother Courage, Le Petit Prince (Orion Radies), Oliver Twist, Joan of Arc) – a world that becomes increasingly dangerous for Mona. 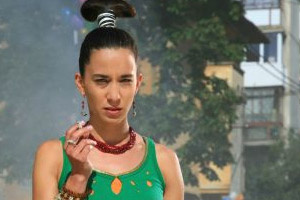