A Danish officer, Michael (Thomsen), is sent to the International Security Assistance Force operation in Afghanistan for three months. His first mission there is to find a young radar technician who had been separated from his squad some days earlier. While on the search, his helicopter is shot down and he is taken as a prisoner of war, but is reported dead to the family.

His wife Sarah (Nielsen) and younger brother Jannik (Kaas) both deeply mourn him, and that brings them closer together. They kiss once, but pass it off as the grief and do not pursue the relationship.

Meanwhile, both the officer and a young technician are locked up in a warehouse, kept without food or water. After Michael shows them how to arm and disarm an anti-aircraft missile, his captors decide the technician is no longer useful and have Michael bludgeon him to death with a lead pipe in order to save his own life. Eventually he is rescued and brought back to Denmark. The guilt of what he did forces him to lie and provide false hope that the technician may still be alive.

Michael becomes unstable, spiraling down into a pit of guilt and rage, and begins to threaten and abuse his wife and tear the house apart. It finally becomes necessary for the police to intervene. Michael overreacts, pointing a policeman's pistol at the officers. With Michael in custody, Jannik helps Sarah to begin the repairs to the house.

In the car, Sarah passes a sign reading "Statsfængslet" (National Prison). Her visit to Michael in prison finally forces him to admit the truth about Afghanistan. 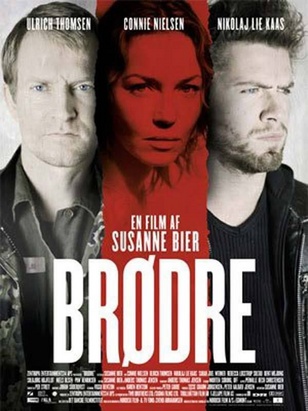