Coincoin and the Extra Humans

Quinquin has grown up. He’s now called Coincoin and hangs out on the Opal Coast, where he takes part of the Bloc meetings with his childhood friend “le Gros,” while his beloved Eve has abandoned him for Corinne. Meanwhile, commander Van der Weyden and the loyal Carpentier are canvassing the countryside where migrants wander and strange magma falls from the sky onto the inhabitants who begin to manifest odd behavior. While the citizens gradually split into two, our two heroes investigate what appears to be “inhuman” phenomena. The extraterrestrial invasion begins. 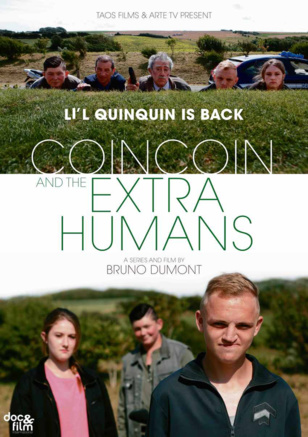