Venice is pure romance; that which all Europeans yearn for, the dream of all Americans, the wish of all Japanese.But the world’s most beautiful city turns into a ghost town at nightfall. Entire quarters, long since abandoned by their inhabitants, stand empty, their structures merely providing a myth to serve business interests.

Twenty million foreigners visited the city last year. That’s an average of 60,000 day. And this year it will be more still. By comparison, there are only 48,000 inhabitants, the same amount as they were after the Great Plague of 1438. And next year it will be fewer still. For the city is becoming uninhabitable. Venice’s own urban life has almost collapsed; it scarcely still exists.

The film shows what remains of Venetian life: a subculture of tourist service industries; a port for monstrous cruisers which is waiting to be expanded; Venetians who are moving to the mainland as there are no longer affordable apartments to be found; an aged noblewoman who treats the municipal council with scorn; a realtor who is considering abandoning the sinking ship.

A Requiem for a still grand city. An illustration of how common property becomes the prey of few. An elegy to the last Venetians, their humour and their hearts. 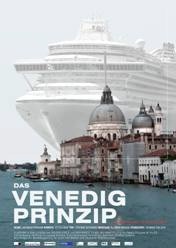