Moon Man is adapted from the acclaimed and best-selling book by Tomi Ungerer, the number one writer for children’s books. Translated and released worldwide, it is the most successful book of his career.

If only Moon Man knew just how much children loved him! But he's not even remotely aware, he's just sitting on the moon, bored stiff, in his lonely silver sphere...

One night, a shooting star appears, whizzing through outer space towards the moon. Moon Man seizes his chance, grabs the speeding comet by the tail and hitches a ride to earth! This 'attack from outer space' sets the alarm bells ringing in the Presidential Headquarters. The President himself is absolutely furious. He has only just conquered the last speck of earth, defeated all his enemies... And now, of all times, his dominion is being attacked by aliens from another planet! The only traces they find of the intruder are silvery footprints near the edge of the crater’s impact.

While escaping the President and his soldiers, Moon Man will set off on a long journey, where he will marvel at the many wonders the earth has to offer and realize how much children love and need him. 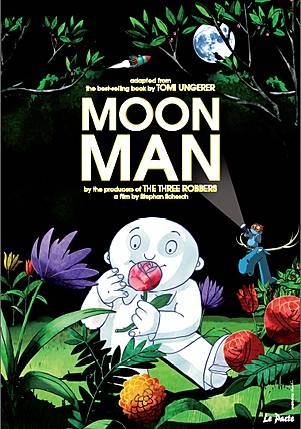