Winter of 1999. A small ferry crosses the Venice lagoon. Camilla, a shy eighteen year-old who has just arrived from her small town to study Russian literature at the University, spots a boy among the crowd. He too is a new arrival carrying a suitcase. The two exchange looks: hers are reserved, his bolder. Silvestro is the same age as Camilla, but he masks his lack of experience behind a naive brashness. When the ferry docks, he decides to follow the girl in the narrow, foggy streets of an island in the lagoon. An adventure destined to last ten years begins, taking the two young people from student life in Venice to the unsettling frenetic pace of Moscow’s theatres and enormous, traffic-filled streets. Camilla and Silvestro live other love stories, they write each other, they are housemates in the lagoon, they both attend a wedding in the Russian countryside as guests, and later they absentmindedly pass each other in a rowdedmarket in Rialto. At various points they are enemies, friends, in love, closer to each other or distant. TenWinters is a love story, or better yet the prologue to a love story: a ten-year prologue told in tableaux. Each winter opens a window into the lives of two people who never completely lose touch but continue growing, marked by their difficult but glorious entry into adulthood. 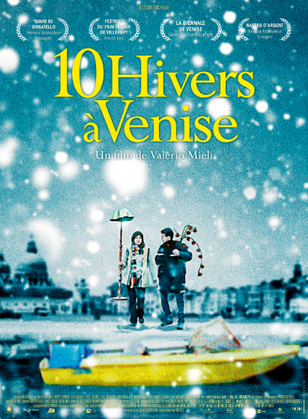