Twenty-eight years after the fall of communism and on the eve of a new presidential election, Hungary has arrived at a political crossroads. Is the country about to embark on another four years of right-wing populism, with Viktor Orbán and his Fidesz party remaining in power, or will former Prime Minister Ferenc Gyurcsány and his pro-European left-wing party prevail? Filmmaker Eszter Hajdú followed both campaigns, but also gained access to the personal life of Gyurcsány. The resulting unique and sometimes moving scenes reveal the exhaustive efforts made by the candidate and his wife to get Hungary to shift to the left. 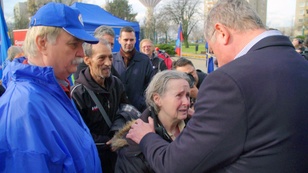