Hop-O’-My-Thumb and his four brothers are abandoned in the woods by their parents, who can no longer take care of them. Scared, they go deeper into the woods and wind up at a large house. The woman who owns it warns them: it’s better to get lost in the woods than entering this place, because an ogre who could devour them also lives there. Marina de Van was very sure about it: when she saw the possibility to adapt “Hop-O’-My-Thumb”, she knew that what she wanted was to dig deeply into the terror in Perrault’s story. An extreme filmmaker (Dans ma peau is an auteur horror milestone, from the à la French new flesh), her approach to this classic tale is bursting with epic poetry and violence. 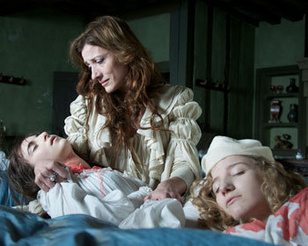