An old shepherd lives his last days in a quiet medieval village perched high on the hills of Calabria, at the southernmost tip of Italy. He herds goats under skies that most villagers have deserted long ago. He is sick, and believes to find his medicine in the dust he collects on the church floor, which he drinks in his water every day. A new goat kid is born. We follow its first few tentative steps, its first games, until it gains strength and goes to pasture. Nearby, a majestic fir tree stirs in the mountain breeze and slowly changes through the seasons. Le quattro volte is a poetic vision of the revolving cycles of life and nature and the unbroken traditions of a timeless place. The story of one soul that moves through four successive lives. 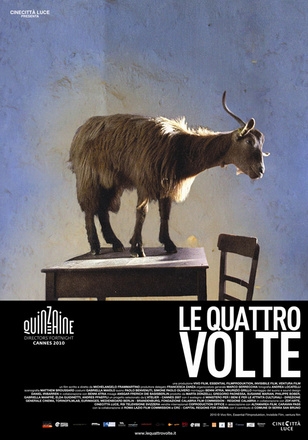