The First, the Last

Esther and Willy are handicapped. And in love. And on the run. Perhaps from Gilou and Colise, two burly, bearded snoopers in the van who are trying to get a fix on Willy’s mobile phone? Or from the man who calls himself Jesus and has the stigmata on his hands to prove it? Or from the men from a nearby warehouse who are searching for the perpetrator who has violated the wife of their boss? And who is the mummy in the sleeping bag? 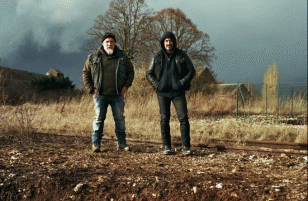