The military missile testing site on Sardinia is picturesquely situated between the coast and a mountain range, a seemingly pristine natural setting. Yet it has been in a state of constant "war" since 1956, as the film footage of the military test series shot and archived by the site’s own film department bears witness. This cinematic survey by Massimo D’Anolfi and Martina Parenti is of a radically different nature. They scour the battlefield for signs of devastation: munitions, rubbish, rusted equipment. They make visible what actually cannot be seen. The soil is heavily contaminated; there have been repeated deformities in both humans and the animals that graze on the test range. With a rigorous visual approach that eschews any explanatory commentary or interviews, the filmmakers are less concerned with presenting facts than conveying some disturbing insights. The irrevocable nature of human intrusion into nature makes words such as "unspoiled" or "pristine" seem absurd. The death of a mouse before our eyes, the images of a deformed calf in its death throes serve as a portent that it is about much more here than just collateral damage from constant war games. 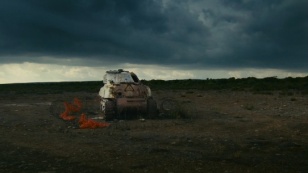