How did Redzepi manage to revolutionize the entire world of gastronomy, inventing the alphabet and vocabulary that would infuse newfound pedigree to Nordic cuisine and establish a new edible world while radically changing the image of the modern chef? His story has the feel of a classic fairy tale: the ugly duckling transformed into a majestic swan, who now reigns over the realm of modern gourmet cuisine. But beneath the polished surface, cracks appear in the form of old wounds. 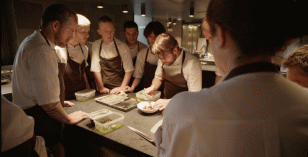 MEDIA support for its release in Denmark