Three women are forced to flee their homes in a war torn region of Colombia. Rocío’s family has gone missing and she is escaping her hometown, cornered by paramilitary troops. La Mona has stabbed her boyfriend, a young, abusive paramilitary commander. She escapes, weakened by the consequences of a self-induced abortion. Nelsa has deserted the paramilitary after having accomplished her last assignment, burning the dismembered bodies of executed peasants. Each of their journeys will be marked by encounters that will give them strength to move forward.From the humid jungles to the cold outskirts of Bogotá, Oscuro animal presents the inner journey of these women fighting for a new life.

Director’s note
My film focusses on people who have suffered war trauma and are forced to flee and leave their homes to start a new life somewhere else. I want to demonstrate the inner strength of these individuals, who go through an intense and painful survival process. The film shows how the three characters build an inner space where they find the strength to push forward. 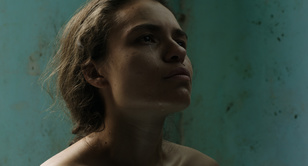