Ulrich Seidl takes a look at what it means to carry the cross in Austria. His most simple yet nonetheless most complicated film shows a woman who spends her vacation proselytizing with statues of the Madonna until her husband, a Muslim, comes back from Egypt. They sing, they pray and they fight. "PARADISE: Faith" is a filmic Pieta with the stations of the cross depicting a marriage. 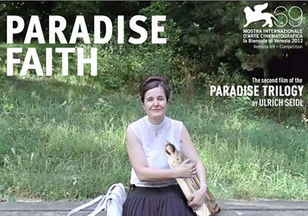