For Bruno, the agricultural show in Paris marks the high point of his year since it means he can go on a wine tasting tour through France’s wine-growing regions and drink his way from one stand to the next without even leaving the exhibition hall. His father Jean apparently has but one aim in mind: to win a prize with his breeding bull Nabuchodonosor. Bruno is sick of being a farmer and wants to get out of the family business. Jean decides this year to motivate his son by taking him on a real vineyard tour. And so, having hired a young taxi driver named Mike, they set off on an improvised trip through a number of different wine-growing regions. During the course of their meanderings, these three different men get to taste not only delectable wines such as Saint Amour, but also the pleasures of love. 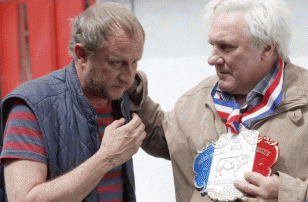