The Act of Killing

In the year following the Indonesian military coup of 1965, pro-regime paramilitaries of the Pancasila Youth and sadistic criminals killed more than a million alleged Communists. These murders went unpunished and the perpetrators are still powerful, influential people who can rely on the support of corrupt politicians. These men proudly recall their struggle against the Communists and demonstrate their efficient methods of slaughter. Slim Anwar Congo and portly Herman Koto are delighted when the film's directors ask them to re-enact these murders for their documentary. They zealously set about finding actors, designing elaborate costumes and discussing possible scenarios. They see themselves as film stars who will show the world Indonesia's true premen or 'free men'. But eventually the film project gets these men to talk about and reflect upon their actions as they have never done before. Congo says that for the first time he felt what his victims must have felt. It begins to dawn on him exactly what he did to hundreds of people. The reconstruction of reality has become more real for these men than their actions originally were. 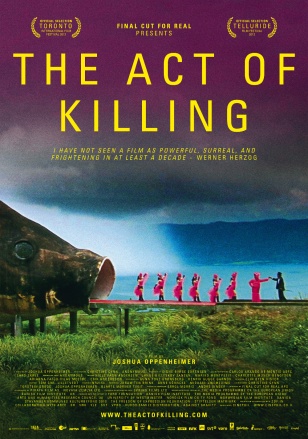