Eric Lomax (Colin Firth) is a quiet, middle-aged radio and railway enthusiast. He meets kind, sunny Patti (Nicole Kidman) one afternoon on a Scottish train. The year is 1983. A whirlwind courtship and wedding follow, but on their wedding night, and for many nights to come, Eric succumbs to graphic, paralyzing nightmares. He provides Patti no explanation.

Confused and hurt by her new husband's remoteness, Patti turns to Eric's friend Finlay (Stellan Skarsgård), who finally discloses her husband's harrowing secret: along with thousands of other British soldiers captured by the Japanese during the Second World War, Eric was forced to work on the construction of the Thailand- Burma Railway — the so-called Death Railway. When a secret radio he had built was discovered, he was brutally tortured by a Japanese officer. Realizing that there is only one way to save her marriage, Patti begins the search for the man who haunts her husband's soul. 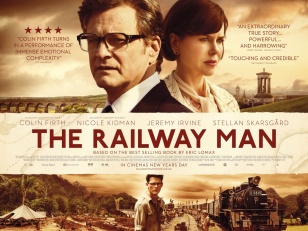